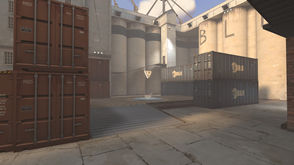 cp_granary_pro is a 5CP map, created from the basis of cp_granary, which was originally created by Valve.

Some of the tactics written on the default cp_granary may be applicable to this map.

cp_granary_pro is a map that was first created by Team Fortress 2 player, Mark. The map, created for the competitive community, featured small features that would make the map more convenient to its players; such as no roof over choke, and the removal of rocks & cones which had caused splash damage absorption.