From comp.tf
Jump to navigation Jump to search
Steel
[e][h] 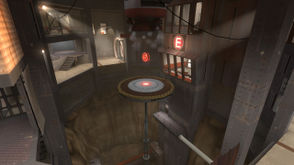 Steel is a non-linear Attack/Defend map consisting of 5 points.

Steel centres around point E, the site of a rocket launch. BLU must capture E by standing on it to win, while RED must defend it from being captured until the round timer counts down to zero.

BLU can capture point E at any time, but this is very difficult as the point requires certain classes to reach, and it is a slow point to capture and very exposed. To assist them in taking E, BLU may choose to attempt to capture the other four points instead, which reshape the map and extend the round timer to make it harder for RED to defend. These points, A through D, must be captured in order.

Capturing any point will extend the timer. Point A will open doors to point B, D, and E for BLU. Point B will open a door to point C, and move RED's spawn quite far away to point E. Capturing C makes bridges slowly extend to point E, so all classes can capture it. Capturing D puts railings on these bridges, and blocks off some of RED's spawn exits so they must travel the long way around to reach point E.

The large amount of potential choices to be made on this map, for both RED and BLU teams, makes it an excellent arena for skilled strategists and good team players.

When Point A is captured[edit]

When Point B is captured[edit]

When Point C is captured[edit]

When Point D is captured[edit]