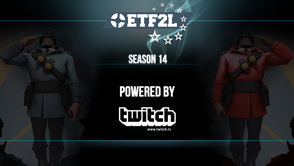 Season 14 was the fourteenth season of ETF2L's 6v6 competition, sponsored by Twitch.
Signups began on January 2nd, with hundreds of teams entering by the deadline of January 11th. After the divisions were published, the main season began on January 20th.

Players in all divisions received a medal for winning their division or a Participation Medal for just competing.