From comp.tf
Jump to navigation Jump to search
Converge
[e][h] 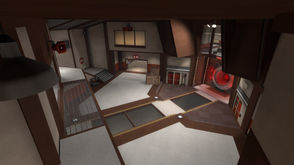 Ctf_converge is a Capture the Flag map made by the mapmaker Psy. The map was originally entered for TF2Maps.net's Competitive CTF contest and was placed 4th place.

Converge has one intelligence on the entire map which is located in the center. Teams must fight for the intel and capture it in the enemy base. Much like the BBall mechanic, if the inteligence is dropped, any person from any team can pick it up, however, if the intel is left for 10 seconds, it will respawn at the spawn point.

The map was played in ETF2L HL Nations Cup 1.

The winner is decided by the team who captures the most points, as on any capture the flag map. Teams may also hold onto the intelligence after one capture and let the timer run out.