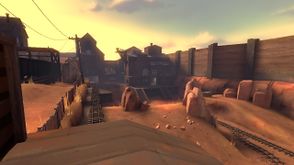 pl_goldrush is a Payload map and the first map included in Team Fortress 2 to feature this mode, as well as the third non-release map added to the game. It is broken into three stages.