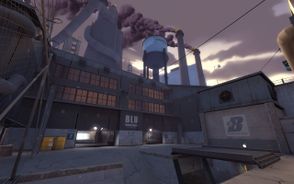 arena_waste is a community-created Arena map made by Eric "Icarus" Wong. It was adapted from pl_waste by the same mapmaker; the middle capture point fighting area for Waste (PL) was extensively reworked and customised for TF2 Arena play. Teams are given multiple entrances to the central area, each with their own advantages and disadvantages.

There are also 5CP, King of the Hill and Payload versions of Waste.