From comp.tf
Jump to navigation Jump to search
Intermodal
[e][h] 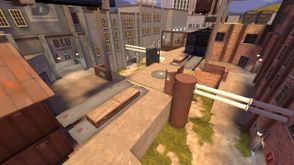 cp_intermodal is an custom 5CP map made by Hyce. It was released on October 25, 2013 and was tested in the preseason of the UGC 6v6 2014 Summer Season. The map name had its spelling changed from "Intermodel" to "Intermodal" in the RC3a release. It is unknown if this is a spelling error or if the map name was intentionally changed.

The map received some criticism regarding the number of entrances into small areas and the difficulty of holding a point.