From comp.tf
Jump to navigation Jump to search
Upward
[e][h] 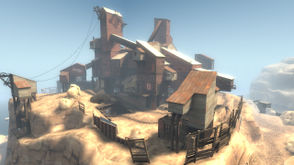 pl_upward is a single-stage Payload map created by Valve. It was the third Payload map added to the game. Along with pl_badwater, it is considered one of the staple Payload maps played in Highlander. It also tops the most amount of inclusions for any highlander map with 28 inclusions across competitions.

As always on Payload, the attack starts by preparing the ÜberCharge in spawn and leaving the Medic there for a short period of time while the rest of the team attempt to create an advantage by suiciding. Once an advantage has been created, the team can prepare for a push.

All viable push routes are located in open areas, which leaves the combo vulnerable to a Sniper on Playground. Because of that, a Sniper pick is particularly useful on this point, as it allows to avoid a potential death of the Medic.

Generally, teams decide to push the first point through the cliff area, as most teams' combos will either hold the ground area or the under area. The only difference is the defense's sentry placement:

Due to the openness of the point, the defenders need to be particularly wary of jumping classes and sightlines. This means it's hard to establish a permanent hold on this point, so the defenders should seek only to delay the attackers.

The sentry's positioning is particularly important, as it shapes up the defense's game plan:

It's important to remember that the slope is the only viable escape route for the combo, as the tunnel area is easy to spam. The defenders need to keep that in mind and move early enough to be able to back out in time.

After capturing the first point, the attackers should prepare for a push on the second point, while the flank classes should attempt to get the cart as close to the tunnel exit as possible. The attacking team usually holds somewhere between the cliff entrance and the side tunnel, but in doing that they need to be wary of the enemy Sniper, call his positions out accordingly and try to spam him out.

Choosing a push depends on how close the defenders choose to hold.

As this is one of the major holds on the map, some teams will often overcommit and lose many players when defending. If that happens, it's vital to capitalise on this and spawncamp as much as possible, and push up quickly after the point is captured, to try and get the next point unopposed.

After the enemy team takes control of the first point, the combo should immediately take position on platform and holding there. Holding near rocks is too dangerous due to being so wide open to snipers and jumping classes. Generally the heavy sits on platform while the Demoman takes position closer to the tracks so he can spam the window, behind the rocks or into tunnel.

Once the enemy team pops uber onto the sentry the combo can back up into the house behind platform, and either back up to third, or counter-pop and attempt to take control back of the area. Depending on what the team decides, you may want your spy to watch the entrance to house and call out when the enemy combo move through there. Then your combo can attempt to kill the enemy combo preemptively.

The attacking team will likely push with their combo up the hill under bridge while having the scout and engineer push the cart as far as they can. The demoman is a key class for defending this point, as he can spam both the hill and the tracks leading up to the third point. A more aggressive sentry spot that can be effective when the cart has not been pushed very far is on outside, as it can deny the hill. However, extensive use of the wrangler will be required to fire at those pushing the cart. When the cart has been pushed past the bridge, the best spot to place the sentry is back on the flat section of track leading up to last. This spot helps defend the third point from being captured. It is important to watch out for attacking players flanking through under tracks and into C hut.