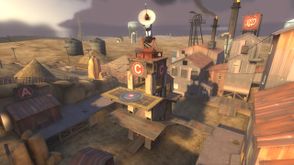 cp_gravelpit is a single-stage Attack / Defend map made by Valve. It was one of the six maps included with Team Fortress 2's retail release.

The objective of Gravel Pit varies on the side. BLU's objective is to capture all of the three points, meanwhile RED's objective is to defend the points until the time limit runs out. Points A and B can be captured in any order, but point C is always captured last.

This match is played in Stopwatch mode. In Stopwatch mode, in the first round one of the teams attacks, and the other defends. The attackers attempt to capture points. Every time after a point is captured, it is added to the team's total, and the time from the beginning of the round to the capture's finish is recorded. Once the round ends (either by the attackers capturing all points or the round time limit running out), the teams switch places. Now, the previous defenders, who are now attacking, need to either capture as many points as the opponents, but in a quicker time, or capture one more point until the round limit runs out (if the opponent failed to capture all points).