From comp.tf
Jump to navigation Jump to search
Badwater
[e][h] 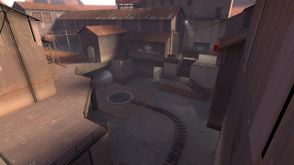 Badwater is a one of the standard Payload maps played in Highlander, next to Upward.

The round begins with the usual suicides, while the Medic waits in spawn with his ÜberCharge. A particularly important pick on this stage is the defending Pyro, because all the viable push routes can be easily denied by him, due to the airblast's knockback.

The ÜberCharge should be used once the cart is near the exit of the tunnel below the top area; the sentry will be overlooking that area, so taking it down is a priority. A team can decide to push from the following routes:

As usual on Payload, the defensive team's aim is to hold back the attackers as long as possible, without overcommitting to the defense of the point. Usually, when a team has neither an ÜberCharge, nor a Sentry Gun, it will back up to the next point.

Stopping an enemy push should be easy enough with the Pyro, if the situation is even. It is extremely important for the Pyro to survive, as he can make or break a defense.

The defenders need to watch out so that the cart doesn't reach the Control Point if they are holding in the usual spot up top. Due to that, a team will usually devote a Scout or a Sniper to watch the tunnel area. If the enemy combo decides to use the ÜberCharge inside the tunnel, simply dropping down an übered Heavy-Medic combo should stop the push.

The only escape route on this point is following the railtracks, so the defenders need to make sure to get away early to avoid losing players on the way out, which due to the respawn times being longer on defense, might prevent them from being able to effectively defend the next point.

Despite the cart moving through the area below the roof, just in front of it, actually no fighting takes place there. The only classes that might be down below during a stalemate are the pushing BLU classes and the RED sniper.

Assuming a stalemate situation, an attacking team will seek to build the ÜberCharge while suiciding its players to try to get an advantage until the Medic is around 80%. The nature of this point, including the huge height advantage, renders any kind of push on the cart useless; the attackers are pretty much required to take the roof to advance.

The huge flank area behind the roof might help any bombing players, as they can easily cover the distance via explosive jumping, and it's the only way to attempt a suicide play on the enemy combo. It also holds two medium healthpacks, one in the room in the back and one in the corner of the fence.

There are two viable pushing routes on this point:

If the enemy team lost a lot of players on the first point, it is a good idea to push up the combo to the first RED spawn door and basically spawn camp the enemy, forcing them to take the longer route and lose the second point without contest.

Acquiring the roof is crucial to attempting any kind of defense. If your team cannot get on the roof in time, it's simply wiser to attempt a third point defense instead. The sentry should be positioned on the ledge of the roof, to deny all players trying to push the cart.

Once again, it is very key for the Pyro to stay up at all times, as he excels while he has a height advantage over the attacking combo. Another important aspect of this point is making sure the flank area is being watched at all times, as the attackers might attempt to kill the Medic by bombing.

If the enemy team used their ÜberCharge, and the defending Medic is on about 85-90%, he can retreat through the back stairs and then towards the cart, just to double-back and go up again when the enemy über fades, cleaning up all the attackers and perhaps reacquiring the roof.

The third point is considerably separated from the two previous ones. There are just three entries into this point, two of which are vulnerable to spam, and the third is too open to consider pushing from. This means going without an ÜberCharge is very much unadvisable.

The attacking team can choose one of the three locations to push:

Suicides are very tough on this point, as there are no good flanking routes. On the contrary, if the Engineer uses the window sentry, he might be vulnerable to Spies, and if the Pyro is with the Engineer, that puts the combo at risk. Any successful attempt on either of them is an immediate cue to push as soon as possible.

This point is even better than the previous ones to defend, due to a multitude of reasons, some of which were outlined in the Attacking section.

The defenders can hold in two places:

There are also two sentry positions:

If the defenders are pushed out to the corner, it is pretty much impossible to defend the third point any longer. The defending team should back up to the last point.

The fourth point gives a bit more leeway when trying to push than the previous point. There are a couple of ways of attacking the last point:

The flank classes can utilise the stairs to try and get a pick in a moment of confusion.

The sentry is usually placed below the platform, due to being able to shoot into the map room from this position.

The Scout or the Soldier usually watch the flank to make sure no attackers slip by.

As on the second point, if the Medic is close to über, and the other team used theirs, you can retreat up the stairs, charge the remaining percentage, and go back down.