From comp.tf
Jump to navigation Jump to search
[e][h] 5CP 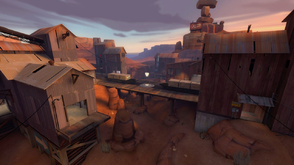 To see a full list of maps used in competitive play or to find out more about Team Fortress 2 maps in general, see: Maplist

5CP (5 Control Points) is the most commonly played game mode in the 6v6 format of competitive Team Fortress 2, though it is sometimes played in Highlander. This mode revolves around capturing and defending control points.

Every 5CP map contains 5 Control Points, laid out symmetrically. The opposing sides of the map are themed red and blue, indicating RED and BLU ownership. Some features may vary on either side of the map, such as a lower right spawn wall on the Blu side of Granary.

The game begins with all control points but the third, middle point locked. Once both teams arrive at the point, a midfight begins. The aim of the opposing sides is to try and defeat the other team, therefore ensuring them the capture of the point.

Midfights play a key role in matches, as their outcome can shape the remainder of the round in a significant manner.

After the midfight, the gameplay revolves around defending and attacking. The defending teams employ holds, by positioning themselves such that a potential attack attempt is slowed down as much as possible, while the attacking teams carry out pushes, which aim to break the enemy holds and enable a capture.

The teams' attacking and defending roles can change at any time, due to a change in the situation on the battlefield. When one team has an advantage, whether it is a higher ÜberCharge percentage, a higher number of players alive and fighting, a bigger amount of health, it will seek to attack.

Due to the advantage-based playstyle, games will sometimes stalemate as both teams seek to gain an advantage. Potential ways of doing so are suiciding on the Medic or trying to acquire a pick - a kill on an opponent, which will open a possibility of pushing, exploiting the opponent's death.

In every round, at least one team will be in a situation where they have control over only one of the five points on the map. That point is therefore referred to as the last point.

Pushing and defending the last point is a staple element of 5CP play, in the same manner as midfights. The strategies employed depend on the advantage situation. If one team is in a disadvantageous situation, it will deploy one or more offclasses, aiming to get pick off the defenders' Medic on attack, or to hinder the attacking push on defense.

A last push is pretty much impossible without an ÜberCharge, as the nature of the last point provides an advantage for the defenders, as there are no real flank routes, and the last point is closed off from the rest of the map. Attackers do get a shortened respawn time compared to the defenders, but it is not significant enough to warrant an off-ÜberCharge push.

A 'coast to coast' push refers to the process in which a team forced to their last point manages to push all the way to the last point of the opposing team, subsequently resulting a capture and round win.