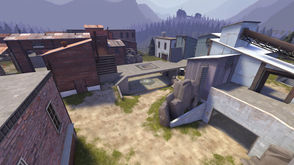 cp_warmfrost_rc1 is a Control Point map made by the TF2Maps user, "Ice Crystal", and is currently used in UGC's 4v4 tournament.

The map had initially started off as cp_whitefrost in 2013 and was first seen in competitive gameplay around January 2014, which was the first 4v4 season in any league, in its beta (b1) form. As of July 2014, the map had released its first release candidate version, as well as including the branched Warmfrost, summer version of the map.