From comp.tf
Jump to navigation Jump to search
2Fort
[e][h] 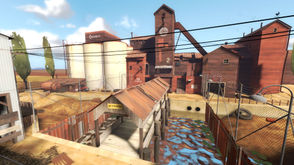 ctf_2fort is one of the six maps included with Team Fortress 2's retail release, and is a staple map of the series, playable in all other Team Fortress games.

The objective of each team is to reach the other team's basement on the far side of the map, retrieve a "flag" briefcase, and return it to their own basement without dying en route.

Due to the high prevalence of tight corridors and low ceilings in the map restricting movement, and the difficulty of breaking a defense leading to stalemates where neither team can win, 2fort is currently unpopular as a map choice for the TF2 competitive community.