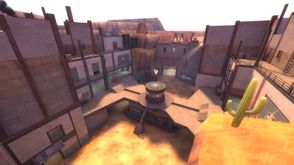 cp_gullywash_final1 is a map created by Arnold. The map was first posted to the TF2Maps.Net forums on April 9, 2009 and was promptly included in ETF2L 6v6 Season 6 later that year. The map has been a staple in the competitive 6v6 scene since then, and was officially added to the game on October 13 2011.

Gullywash is well-known for its more closed design; featuring only two entrances (choke and big door) to its middle point as opposed to the more popular three entrances. This can often lead to more stalemates and slower play around the second point. In contrast, Gullywash is notorious for its relatively fast-capping last point featuring a flank route underneath the point known as "water".

Gullywash is used commonly in both Highlander and 6v6 across multiple leagues.

There is an area which can be accessed by walking all the way through River which has an opening under the point and a way to access the point from behind. This area is called "Water" because in early versions of the map the area was filled with water. There is also an area under Left which allows access to the control point. This area is generally referred to as Secret. It is important to clear both Water and Secret before moving out, as Scouts and Roamers will often attempt to hide in these areas and walk onto the point after the other team has left.