From comp.tf
(Redirected from KOTH)
Jump to navigation Jump to search
[e][h] King of the Hill 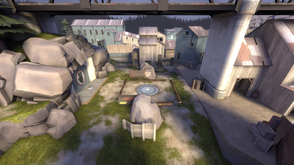 King of the Hill, also known as KOTH or KotH, is a standard competitive gamemode that functions similarly to 5CP.

In a King of The Hill map, there is one central point on the map. Each team must try to capture that point. When one team does capture the point, their 3:00 timer will begin to count down and their respawn time is increased. When the other team captures the point, the other team's timer stops, their timer starts to tick down, and their respawn times are increased. The first team whose clock reaches 0:00 wins the round. However, if the point has capture time on it when one team's timer reaches 0, the game will go into overtime, where the defending team must reverse the capture fully or the attacking team must capture the point completely to advance their timer.