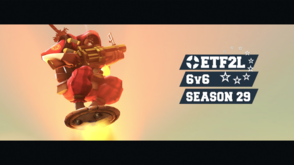 Season 29 was the twenty ninth season of ETF2L's 6v6 competition. The dates were announced on the 1st of January 2018.[1] The whitelist was announced after the Global Whitelist Test Cup concluded, and uses a more permissive provisional.[2] Reckoner is removed from the map pool.[3]
From this season High tier was split into one Division 1 and two Division 2 groups due to not having enough signups for a Swiss System. The Low tier was additionally reintroduced into the league.[4]