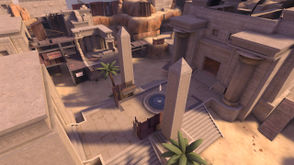 koth_lakeside is a King of the Hill map made by the mapmaker 3Dnj and made official by Valve on February 24, 2011. It is played frequently in Highlander, having been used by UGC for several seasons.

The objective of Lakeside is to control the middle point for three minutes. The two teams spawn on opposite sides of the map and rush toward the middle when the round begins. A round will continue into overtime if the timer is up but there is still enemy presence on the point.

The first season of UGC Highlander that ran Lakeside in its maplist was Season 4. It is typically played as an early season map because of its simplicity, and the fact that it was a Halloween event map in 2012 makes it recognizable to new competitive players, while being more competitively viable than a map such as Mann Manor.

The overall team strategy on this map is to simply kill the opposing team, take the point, and prevent an enemy counterpush. When in control of the point, the goal is to keep the other team too disorganized to push back. This is accomplished with well-timed kills on combo-members and strong positioning.

During the initial fight for the point, a common position for the combo to push is in valley right behind the obelisk. This puts the medic safely out of sight while allowing him to heal people that are pushing onto the point. There is an important high ground vs. low ground fight on this point, often giving a large advantage to whoever reaches the point first, but doing so puts them at risk to a Sniper. The Engineer often keeps a mini sentry watching his valley to prevent bombers from killing someone. When actually pushing the point the sentry is eventually moved onto or near the point.

Many teams use the Kritzkrieg for its versatility on this map. The critical damage can clear the point for a capture. When in control of the point, a Medic can use the charge to kill an enemy Demoman, Heavy, or Medic, delaying a push from them. Its fast charge speed allows for aggressive contesting of the point or relentless harrassment of the team that doesn't control it. Other Mediguns can be used to better protect the Medic, but it can be more difficult to push onto the point with them if the holding team forces the Ubercharge in valley or around the pool room.

When defending the point when you control it, you should immediately consider a forward hold. You can do a forward hold if you have a significant number advantage and/or open ground that would allow you to do so. The typical forward hold consists of a combo holding the enemy plateau and a flank holding the battlements. This strategy works well with the stock Medigun because you can deny any incoming push with invincibility of your combo and scattering of your flank. With Kritz or Quick-Fix, you need to draw them out far enough that you can push into them, or you'll be sitting on a charge that will not save you from a kritz. A forward hold with Kritz typically involves the combo in the bathhouse, because your flank will be able to call any offensive push long before you're threatened by it.

The offensive strategy on Lakeside is to build an Übercharge while bombing their team and taking advantage of your superior spawn times. Kritzkrieg is usually the best option for this situation, giving you the chance for that magical first crit sticky medic pick. A good play here is to pair up your Demo and Soldier for a tandem bomb while your Spy is somewhere on their side of the map. When executed well, this is the best way to force a charge or kill a medic. All the while, your Sniper is working to create some sort of advantage you can push off of.

The Demoman rollout for Lakeside is very simple. He fires his first sticky in spawn to get as close to the doorway as possible, then he walks out of the main door and uses one sticky to jump to either the bathhouse or the main point.

The Soldier's typical rollout is simply whipping the medic and heavy to the point as quickly as possible. After you reach the yard, most Soldiers will rocket jump toward the bathhouse and try to spam the other team out of it.

Your Engineer is going to want to get a mini sentry watching your yard ASAP. Pyro, Medic, and Heavy will be following the Demo in and attempting to beat out their combo. The combo classes should try to stay alive in preparation for the first Kritzkrieg or Übercharge. The Sniper should either watch through the bathhouse sightline or go for an early pick on someone peeking over the point hill without exposing himself to the enemy Sniper. The Spy should determine what medigun the opposing Medic is running, either via name or by looking at the medic.