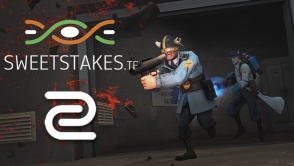 The tournament was primarily organised by Sideshow and had initially invited 10 teams to attend[1] including Ascent, but they declined due to what may have been, a big latency disadvantage [2]
Team froyotech had only one member online when their group was meant to go live and had to drop as a result. A thread on the teamfortress.tv boards about the incident along with communication about the event led to backlash from the community. The thread also highlighted a lot of disappointment with teams using excessive subs.[3]
During the playoff stage, the second map for The Last Resort vs full tilt was delayed for 3 hours and was finally postponed due to excessive technical difficulties and DDOSing. The event was postponed along with it[4] and after some internal discussion, the event was continued without being streamed live (although cut down to a single elimination bracket) with the VODs released on youtube and prizes given out.[5]

The tournament forbids any weapon pick ups on the motive that the i55 admins will not tolerate it either.[6]

Win difference is set to 5 and map time set to 30 minutes. In the event of a stalemate, a Golden Cap round will take place.

Win limit is set to 3 and no time limit set.

No time limits are set, the first team to score a map point wins.

At any one time amongst 6 players:

1 Danger Dogs' main demoman, spudd, was unavailable. Hildreth filled the role for the group stage.
2 froyotech dropped due to only having one player actively online at the time of the tournament. [7]
3 full tilt's alle was not available to play and so Hildreth played in his place for the group stage. Sideshow was also unable to play in the Roamer spot due to casting and administrating the tournament.
4 LEGO used iZon, dmoule and CondoM as substitutes for the tournament.
5 nerdRage.tf2 had to replace Tek for zoob due to Tek being abroad on holiday.
6 Reason Gaming had Raymon play in place of KnOxXx due to KnOxXx being on holiday. Their first game also featured atomic- on Scout and basH. on Demoman. Mike and Raymon switched roles for the second map of the first game. basH. returned to the team for the final game of the group stage on scout when Hafficool had to leave the tournament due to family commitments and the tournament running late. shocky filled in for Hafficool during playoffs and Permzilla filled for kaidus on the first game.
7 The Last Resort used schocky on Scout and Mirelin on Medic due to the lack of availability of their own team members during the group stage. huhy was meant to be playing Demoman in the group stages but his internet had dropped after the first game.[8] ryb was used for the remaining duration of the group stage. spudd played as the team's Demo for the first playoffs map.

Game 2 had server changes due to DDoS, resulting in the lack of logs for the first caps.

Game 1 had two server changes due to DDoS, resulting in the lack of logs for the first caps. The game was finished without a broadcast or public announcement and so details for the maps are unknown.