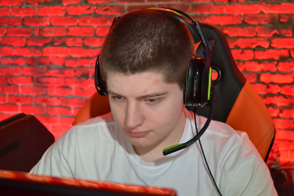 Paul "Raymon" Angold is a British Competitive TF2 player currently Medic for Se7en. In his first Premiership season he played for Iconic European Team Epsilon eSports and was KnoxXx's protégé. A few years later he joined top team nameLess and competed at Insomnia58 (when nameLess was sponsored by Crowns eSports Club) and won the event with the team. He is known for his expert Medic mechanics and movement and is considered currently the best Medic in Europe.