From comp.tf
(Redirected from Minigun)
Jump to navigation Jump to search 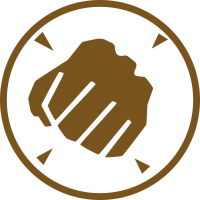 A portly Russian bear, Heavy has the most health in the game, with a total of 300. Not only that but his primary weapon, the Minigun, does the most damage per second in the game at close range. However, he also has the lowest movement speed in the game, which diminishes to a crawl when his Minigun is spun up. As a result, Heavy is often unable to chase down damaged enemies to finish them off, and he has a hard time dodging high-damage attacks such as Demoman's grenades and stickybombs, Soldier's rockets, and Sniper's headshots. Additionally, he has no long-range options - he can only deal chip damage when not in close range. Heavy will most often be found near his team's Medic, as the extra 150 health buff lets Heavy block damage intended for his teammates, while simultaneously protecting the Medic from any Spy, Scout, or rocket-jumping Soldier that threatens him.

In the standard 6v6 format, Heavy is usually an offclass, used primarily for repelling enemies on the last point of a 5CP map. Heavy will take the Pocket Soldier's role when in play, allowing the Pocket to roam the map more freely, as Heavy is much more effective as a bodyguard for Medic. In close quarters, he can easily shut down approaching Scouts, Soldiers, and Demomen with his Minigun, keeping them from getting close to his Medic or the objective.

In Highlander, Heavy is the backbone of his team's combo along with Demoman and Medic, who cover his weaknesses. Where Heavy excels in close combat and is vulnerable at mid-to-long range, Demoman is powerful in mid-to-long range combat and suffers at close range. He provides good high damage when pushing forward or defending objectives, but needs his team nearby to operate at his full potential.