From comp.tf
(Redirected from Gas Passer)
Jump to navigation Jump to search 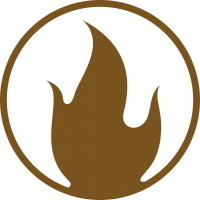 Pyro is a class who wields a Flamethrower as their primary weapon. Along with the ability to inflict burn damage and a moderate but consistent damage output, Pyro also has the airblast mechanic, which can prevent the enemy from gaining ground even with an Ubercharge, reflect projectiles like rockets and grenades, and extinguish burning teammates.

In the standard 6v6 format, Pyro is an offclass on most maps, thanks to their average movement speed and limited range. Most commonly run on 5CP maps when their team has an Uber disadvantage while defending the last point, Pyro's job is to neutralize the enemy team's Ubercharge and protect their team from projectiles from the enemy Soldier and Demoman. This buys time for Pyro's team to organize a counterattack, potentially saving the game. While Pyro is run full-time in other competitive formats, their average speed, low range, and mediocre damage prevents them from excelling in the fast-paced 6v6 leagues.

In Highlander, Pyro is their team's bodyguard. Their main job is to protect their team's combo, especially the Medic. They also are responsible for delaying or neutralizing enemy Ubercharges, spychecking to prevent the enemy Spy from landing a pick, protecting their team's Sentry Gun by deflecting projectiles, and providing flank support when required. Pyro most commonly positions themself near the combo, and is their defense against pick classes, allowing the combo to deal damage to enemies without being harassed by the enemy Spy, Scout, or Soldier. If they are not needed to shut down pick classes, Pyro may attempt to flank and ambush the enemy team and attempt a pick on the enemy combo, especially the Medic.