From comp.tf
(Redirected from Market Gardener)
Jump to navigation Jump to search 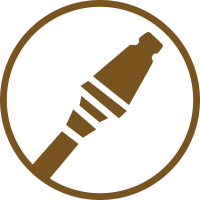 As a good all-around combat class, Soldier is a class played in both 6v6 and Highlander. His high adaptability and mobility makes him vital on any 6v6 team, though his mobility comes at the expense of some health, via rocket jumping. When his rocket jumping is restricted by low health or cramped environments, he is the second slowest class behind the Heavy. His weapon of choice is the Rocket Launcher, a projectile weapon with good splash damage and range, and he boasts the second highest base health in the game (200).

In 6v6, each Soldier will usually fulfill one of two main roles: "Pocket" Soldier and "Roaming" Soldier. The Pocket Soldier focuses on defending the team's Medic, using his high health to block damage intended for the Medic, gain advantageous positions during confrontations, and lead team pushes. The Roaming Soldier plays a fundamentally different role, and is the offense to the Pocket Soldier's defense. Instead of protecting his team, he controls the flank, utilizing his high mobility and health to rocket jump around the map. His job is to set up advantageous battles for his team by creating distractions or killing key targets.

The most basic role of the Pocket Soldier is keeping his team's Medic alive. The Pocket along with the Medic and Demoman form the core "combo" of any 6v6 team. He and Demoman are often the recipients of an ÜberCharge, allowing him to push forward with no fear of damage. Though he is often the third most important pick behind the Medic and Demoman, his massive health pool makes killing him difficult. The standard - "meta" - loadout for the Pocket Soldier is the Rocket Launcher/Original, the Shotgun and the Escape Plan. While the Gunboats does allow him increased mobility during a battle, it reduces his ability to follow up after spending his Rocket Launcher ammo, making it fairly situational.

The Roaming Soldier's main job is to help one of the Scouts on the flank, and create weaknesses in the enemy combo so that his own combo can follow up. He is considered the most "disposable" unit of the team, and will often launch suicide attacks against the enemy combo in an attempt to force the enemy Medic to use his Übercharge - or kill him outright. In order to accomplish this, he must know all the nuances of a map - hiding spots, flanks, rocket-jumping patterns. By utilizing this knowledge, he can remain undetected or out-of-range until an opportunity presents itself. Even if he does not find a chance to attack, he can still relay information back to his team, who can exploit this knowledge to gain an advantage. To maximize his mobility while retaining his firepower, the most common loadout for a Roaming Soldier is the Rocket Launcher/Original, the Gunboats and the Escape Plan.

In higher levels of play, the Pocket Soldier will usually be the main caller; he will lead team plays such as pushes, retreats, ambushes, and even directing ÜberCharges.

In Highlander, there is only one Soldier on each team. He often functions like a Roaming Soldier would in 6v6. As such, many 6v6 Roamer strategies can be applied to Highlander as well. Often used as a mobile pick class, he is mostly run with Gunboats and the stock Rocket Launcher/Original, Black Box, or Direct Hit. A well-coordinated team can organize pick classes to work together for a common goal, like forcing a Medic to use his ÜberCharge or destroying an Engineer nest. In most maps, Soldier is used to control the flank; his job is to prevent enemies from ambushing his team, or ambushing the enemy himself. Some teams will place Soldier closer to his team's combo so that he can defend them with his splash damage.