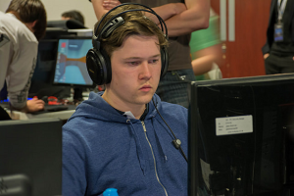 Termo's TF2 career began as a backup Medic for the team BEASTIN' in the earlier years of the Australian competitive scene, before joining the Division 2 team Uprising as Demoman in OWL 4. He then created the team delirium, before moving on to play demo in BoB for Capping 4 a Cause 2, who are known as the only team in Australia to win a grand final against Team Immunity, albiet unimportant as they came from the lower bracket in a double elimination style tournament and lost the second grand final. termo went on to play for Team Immunity in the following OWL 6, which he was kicked from due to being banned from the ozfortress forums and competitions. After the debacle with the admins, termo went on to form a new team with bowt, the 2nd iteration of BoB, a team which went on to place 3rd in OWL 7.

Part of the now-deceased BoB then went on to create One Direction, a team which would later become sponsored by Frenetic Array and go on to place 2nd in Capping 4 a Cause 3 Division 1, 2nd in Australian Team Fortress 2 League's Invite Masters tournament, as well as 3rd in Australia's Alienware Arena tournament. FRAY would later come 2nd in OWL 8 Premier Division before disbanding. termo would then go on to create the team Strawberry Nipples, who played in OWL 9 for 1 round before disbanding mid-season. The death of this team led to the creation of the team supervillains, who would go on to place 2nd in OZFC 3, however termo left the team during OWL 10 and went on to join EG Meats. Termo played for Team Immunity during their trip to i52[1]. Like snowblind, they used to both play on supervillians together. After losing in the lower bracket to Classic Mixup, the team disbanded leaving termo teamless, only to form a new team to compete in OWL 13 and eventually win. Then, termo played for team Pump n' Dump, who came 2nd in OWL 14, featuring 4 of the ex-Immunity players. And lastly played with ego in OZF 15, placing 2nd to Jasmine Tea.