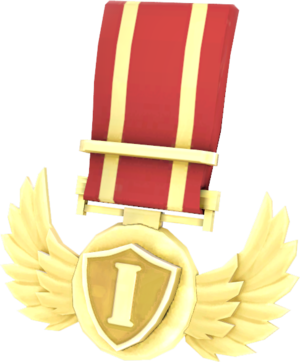 The medal awarded to players finishing in first place

No Restriction 6v6 is a new competitive game mode pioneered by RGL. It is a highly experimental mode created see how 6v6 plays without the class limits and whitelists imposed by other leagues. It aims to see how Valve's in game competitive works when played by the established competitive TF2 community. RGL's founder Sigafoo stated that data gathered from this could be used by Valve to help improve their current competitive matchmaking format, as they have previously requested data from RGL's Prolander league. Keys were offered to any team that used a class composition differing from the established 6v6 meta, regardless of where they ultimately placed. The map pool is stays true to the ethos of the league and includes many game types types, including payload, KOTH, and 5CP maps.

On the 10th February 2019 Sigafoo released on the RGL Youtube a video titled 'Announcing the No Restriction Sixes Pilot League' which explains the premise and reasoning behind No Restriction 6v6. [1] On the 5th March 2019 the first season of No Restriction 6v6 was launched in North America, with 83 teams competing for a $2,360 total prize pool for the Invite Division. [2] Froyotech took the first place in the Invite division with Cat Noises DYNASTY in second and Prevail in third.

The league was renewed for a second season starting on the 17th of March 2020 [3], and the format made it's debut outside of North America in the form of an Australian one day cup on the 18th of April 2020. [4]

With its team sizes of 6 and no class limits or weapon bans, the primary strategy of play revolves around the combinations of classes/weapons chosen by each team, with a large number possible variations possible. Classes can be changed in game at any time. Unlike with other competitive formats, there is not necessarily a combo, though one is often formed around Medic/s on the team.

The enormous number of class combinations possible creates a variety of gameplay options. Combined with no weapons being banned the gameplay options only increase. A common strategy employed by many of the teams is to run two Medics. One Medic almost always runs Uber, while the other may run Vaccinator or Kritzkrieg. At least one Demo and Sniper are often present, but the other classes are flexibly used based on the current situation. A Sniper vs Sniper battle normally forms during a match, but due the flexibility of class numbers and weapons this is less likely to result in a deadlock or stalemate as with other formats. Teams will often explore what is possible, for example a team could run 6 Airstrike Soliders and try to overwhelm the other team, or alternatively could run three Demos and three Medics. Because of this flexibility there is no set strategy or meta, and class compositions vary widely based on the teams playing and the map. Such wildly varying strategies is one of the aims of the format.

Below is a list of organizations which currently host No Restriction 6v6 leagues or cups.