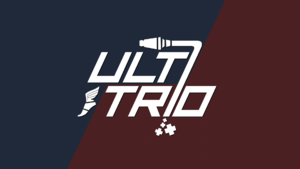 Ultitrio is a competitive format intended for small roster competitive play. It features a three vs three (3v3) game-type, Soldier and Medic pairs, along with a Scout for added support.

Most maps have the 3 player team battling over a King of the Hill game type. As opposed to 6v6, Highlander or even Ultiduo, Ultitrio is more focused on DM skill and coordinated attacks within a team. Since winning a 2v3 or a 1v3 is not very likely, there is a lot of focus to move as a group. This gamemode is played on small KOTH maps that are specifically made for it, or other Ultiduo maps that are more open, but with many ways to regain high ground as any class, even Medic. 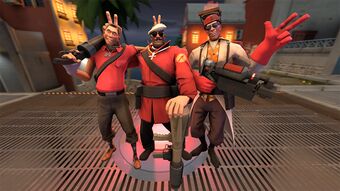 Example of an Ultitrio Class Lineup.

The success of an Ultitrio team heavily hinges on the team's coordination skills and on the inclusion of Scout.

The addition of Scout adds more dynamic gameplay for both teams in comparison to Ultiduo's Soldier and Medic pairs. While having a slightly larger team size, Ultitrio still houses the common core elements of Ultiduo: gaining an Über advantage, health and ammo conservation and immaculate communication and execution skills.

Ultitrio features a small map with a single control point in the King of the Hill style, with 5 minutes needed to win. The two teams are limited to one Scout, one Soldier, and one Medic, with most weapons that provide too great of a disadvantage staying off the whitelist.

It's possible to split up your team to perform pincer maneuvers with Soldier and Medic pushing on one side and a fully buffed Scout pushing on the other, which is a common tactic when pushing. This would not be possible in Ultiduo because of the two-person team limit and stricter weapon bans. With the addition of Scout, it allows for more strategic gameplay because of Scout's added dynamic play styles with weapons like the Fan O' War and Wrap Assassin, leaving Soldier to be more of a "clean up" class after a Scout marks someone or hits that player with a Wrap Assassin ball.

There are two main Ultitrio maps, both of which feature strong high ground & low ground differences and ample pickups like health or ammo packs.

Ultitrio tournaments are often held by community members. As each team requires only 3 players these small tournaments are usually easy to set-up, making it a viable option for offseason competition.

The game mode is often used by players as a source of practice for Scout, Soldier, and Medic death-matching, and regularly sees play in small-scale community tournaments. It sees no official league play as of yet.

While there is no official league for Ultitrios, there are tournaments and PUGs that happen in the official Ultitrio Discord.

Before the finalization of the roster, Demoman was considered in place of Scout, but being as most Ultitrio/duo maps have 2 exits and close quarters, Demoman would be able to lock down every inch of a map for free and subsequently deny everyone, so Scout was chosen for his flexibility and high mobility.