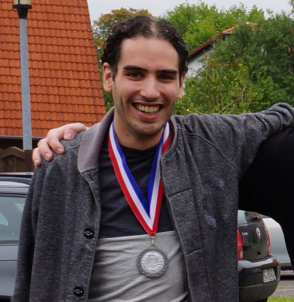 skeej was a Dutch medic lastly playing 6v6 for Comfortably Spanked and Highlander for Fair Enough in ETF2L.

Skeej started playing competitive by joining the public server community of Gathering of Tweakers. He quickly climbed up after winning The Reality, and joined VYE. His ability to adapt quickly to new situations made him a good player and made the way to division 1 before the team folded.

On his way to Premiership[edit]

With a few seasons of experience he tried his luck with DECERTO, who had promising players. After getting third place in Division 1 the season before, they were able to secure a spot in Season 12 Premiership. This would be his break into prem.

Sadly the teams performance declined and it would not be until Season 15 he would be playing in premiership again.

After a few teams folding, he decided to lead his own team again, which in this case would be Fenneks eSports. Pulling them from a Division 1 position to getting a premiership seed in Season 17, his team was able to secure a third place in the Premiership playoffs of season 18.

The fun ended there, as the team was disbanded shortly after. He tried with wookiez in division 1, but that fell short too when they got third place in division 1.

Season 20 promised to be a good season, as skeej was approached by Reason Gaming to try him as medic. They had a good run in cups, namely winning the Sunshine cup with only giving up 2 rounds in 7 games.

However, during Season 20 the team saw heavy resistance, losing to SUAVE and tieing to Awsomniac. To everyone's surprise, the team lost out to Ze Knutsson Rollerbladers and another 3rd place finish was on Skeej' record.

Season 21 had even a stranger turn of events. Reason Gaming lost to The Last Resort and Danger Dogs. The match against TLR had an unfortunate incident where the casters switched over to the team comms, and skeej shouting a Dutch profanity. During his livestreamed games this profanity is often a quick hand remark in Twitch chat whenever he gets focused by the opponents.

The match against Danger Dogs triggered Reason Gaming to change their lineup, and main players like skeej, Zoob and wltrs were kicked out in a manner that sparked discussions about hijacks. Eventually the ETF2L admins allowed it and skeej was teamless.

At DeutschLAN 2015 he met .kr4tos who was forming a lineup for Season 22. Together with Tseini he agreed to join the team.

After a long break he was finally approached by Kill Switch, who at that point were looking for a new medic. The season after, skeej was approached by Fair Enough and joined them. Since then he has been moving to a main position after alternating with Jakeowaty for Highlander-only maps.

He was convinced to go to DeutschLAN 2015 by his team, as they were one of the top contenders for winning it. With Fair Enough he was able to make it to the grand finals, but just fell short of taking the trophy.