From comp.tf
Jump to navigation Jump to search
[e][h]Checksix Gaming

Checksix Gaming was a team in ESEA Invite that was created by Kalkin. The Team started in ESEA S6 Open and ended in ESEA S9 Invite. This team is notorious for having been the first in ESEA history in having a perfect regular-season, however they lost 2 maps to eMazing Gaming in post-season (LAN). 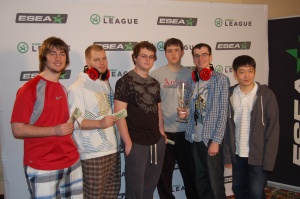 On May 2, 2011 shortly after the ESEA-I Season 8 LAN Grand Finals, Nerdbuster[1] published an article detailing how TLR stole the trophy from Kalkin's Room by posing as him. A video[2] of what happened in TLR's hotel room was also uploaded to Youtube.