Configs (CFGs) refer to the configuration files with the .cfg suffix. They are used by the game to change game settings, such as graphics and gameplay options, upon game startup. Many configs are designed to improve game performance through lowering graphics settings, as well as providing extra functionality through the use of other client commands, such as viewmodel tweaks and network settings.

FPS configs strive to lower game graphics wherever possible in order to increase the framerate (FPS) of the game. Popular graphics configs include Comanglia's and mastercomfig, while configs such as m0reframes and Chris's config have been used in the past. Each FPS CFG features various presets and allows for customisation depending on the degree to which the user is willing to sacrifice graphics for FPS.

mastercomfig - The latest config available, with a focus on optimizing the game with a modern approach. It gets updates frequently and has many customization options. Along with mastercomfig comes the mm_override.cfg file, which changes some settings to comply with the permitted commands in Valve Competitive matches. 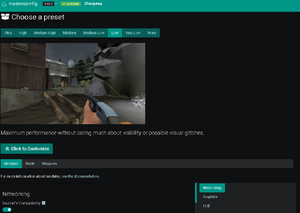 The mastercomfig downloader. It allows users to heavily customize the CFG to their liking.

Comanglia's FPS Config - Historically the go-to config for most competitive TF2 players who need more frames. It's considered by many to be one of the most effective configs currently available.

Rhapsody's Performance Config - An updated version of Chris' dx9frames config created by RhapsodySL. Gives higher frames than Chris' version did and also has some extra features such as in-game config setting managing, among other things.

Chris' Configurations - FPS configs maintained by Chris until 2012. This config used to be the most popular and is still used by a number of TF2 competitive players. Chris' Configs come in several different versions, the most popular of which is the "maxframes config", which gives the maximum framerate possible while at the same time reducing the quality of the textures and the overall look of TF2. Alternatively, players can go for the "Highframes config", which makes TF2 look a little better than "Maxframes" but at the expense of not getting the maximum possible framerate.

This can be done by binding slot1 to 'slot1; viewmodel_fov 0; r_drawviewmodel 0'.