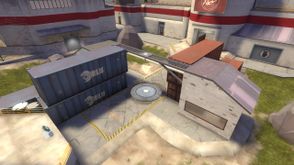 cp_process_final is a custom-made 5CP map created by Ian "Scorpio Uprising" Cuslidge designed for 6v6 play. It is played competitively in all the main leagues.

The map has a very unique and technically difficult set of rollout mechanics, which gives soldiers great mobility to the mid point. It gained widespread attention while still in beta, first tried officially in ESEA the map then started being played officially in ETF2L and later got Valve's seal of approval, making the map official.

It is somewhat of a slow map because the wide last point allows the defending team to get superior positioning and counter even full uber disadvantages, the second to mid-point chokes are also tight and have very prominent sniper sightlines which makes it a very sniper-friendly map and prone to stalemates or uber-exchanges.

The three different control points were based on their respective points of three other maps. The middle point was based on Granary, the second on Badlands and the last on Well. The quality of Process was recognized by Valve and made an official map on July 10, 2013. The official map is the currently played version.

Because of the symmetrical style of Process, each team share a similar landmark / location on their respective sides of the middle point. A popular method to counteract this is to add the prefix "our" or "their", e.g. "their Choke". On the middle point, teams will often call the areas near Grass and Sewer their location relative to their team's choke. For example, Blu would call their Grass "Right" and the area in front of Red Sewer "Left".

Process has very standard point capture times, with x1 capture rates for mid, second and last at 4, 14 and 22 seconds respectively. Compared to other 5CP maps, Process has a high number of medium health packs on the map (10).