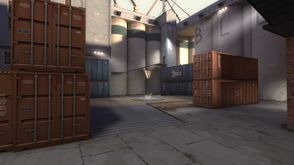 cp_granary is a 5CP map created by Valve, and it is one of the 6 original TF2 maps. It is a staple in the 6v6 leagues and is notorious for being prone to stalemates.

Granary, along with Badlands, was one of the first maps played in the 6v6 competitive format. Granary is still one of the most iconic and most played maps in 6v6, and is also played occasionally in Highlander. Since the first versions of the map there have been numerous changes to it, resulting in more refined and balanced gameplay but it is still considered one of the slowest maps, this results from being an extremely big map, with very tight chokes and easily spammable, making constant stalemates and spam exchange part of the flow of the map.

The last update to the map was in the 10th of July 2013 patch, and revolved around balance and symmetry changes to level the playing field between the teams, while also removing and reworking multiple hiding and jumping areas across the map.

The Granary middle point is characterised best by the big height advantage provided by the four crates around the point. That shifts the class influence to Soldiers, as they're the best at exploiting it. This also means Scouts have less of an impact than usual.

The Demoman can choose one of the three rollouts: through the left entrance, to catwalk or through garage. The catwalk rollout differs from the other two in the fact that it aims for the Demoman and the Medic to take higher ground after acquiring an advantage in the fight, which significantly improves the chance of a won midfight.

Many teams will use double Soldier jumps to deal damage to the rest of the team that is on the lower ground: the Demoman, the Scouts and the Medic. Due to the layout of the point, the Scout's ability of denying jumping Soldiers is hampered. Because of that, one of the Scouts in a team will usually seek to kill the enemy Demoman, while the other stays by his Demoman to prevent the enemy from doing so.

The second point is very characteristic in the fact that it's divided into two distinct, separated areas, with their respective chokepoints: the yard and the building. That means a defending team can choose to hold each of the two areas, depending on the situation and advantages. The second point is the most prone to stalemates in the whole map.

Pushing the second point is heavily dependent on the other team's positioning. If the enemy is holding in the yard, the following push routes should be considered:

When pushing the yard area, the team should seek to acquire a pick or two, which causes the enemy to be unable to keep holding inside the building and forces them to back up to the last point.

Attacking the enemy team holding inside the building can be done in following ways:

Due to the nature of the point, a Demoman pick is usually a sign to push, as his stickies prevent the pushing team from taking ground without an ÜberCharge. As most of the action takes place indoors, a Soldier pick is usually good enough as well.

Defending the second point relies heavily on denying the other team space by the means of spam. It's extremely important for the Demoman to stay alive, as his sticky traps and grenade spam can cover a lot of entrances simultaneously.

A good tactic is to make the enemy team use an ÜberCharge in yard, to then back up quickly indoors and use the Medic's ÜberCharge to walk out and kill the enemy. This can't be done however if the defending team loses a lot of players before backing out.

To avoid a surprise wrap-around push while holding inside, the flank needs to watch the right lunchbox area and immediately report back if any attackers are spotted, so that the combo is aware of the fact and can back out in time.

Other strategies, such as utilising the dropdown area or using a Sniper to try and get a pick from the forward respawn (requires for the player to respawn while the enemy is capturing the middle point) can also work when at a disadvantage.

When pushing last, you have 3 options of where to send your combo. This will depend on where the enemy team is holding, and so choose a plan of attack accordingly.